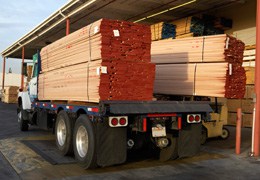 Relations between the U.S. and Canada haven’t exactly been neighborly thus far in 2017. The disputes over potential changes to the North American Free Trade Agreement are causing some serious international rifts.

Home builders are particularly concerned with the now-expired Softwood Lumber Agreement. The uncertainty surrounding a new trade agreement is impacting businesses on both sides of the border, as it was the primary culprit behind the surging lumber prices between mid-January and mid-February.

Tim Jackson, president and owner of Tim Jackson Custom Homes in Allen, Texas, says his market is already challenged with increased labor costs due to the labor shortage, and any increase in the price of materials only compounds the problem.

“Our company does fixed-price contracts so we are on the hook for any price increases from the time of the contract to the actual time of material purchases,” Jackson said. “We do have a small contingency built in, but the recent price increases have far exceeded this contingency. The bottom line is that our margins will be eroded.”

It’s a similar situation for Kurt Dinnes, senior partner of Sun Custom Homes in Oklahoma City, who estimates lumber prices in his market are up about 15 percent from a year ago.

“It’s impacting us the most with our custom homes that we bid on several months ago when prices were much lower,” Dinnes said. “Even then, we were trying to adjust for the inevitable price increases, but we didn’t adjust high enough.

“Our dilemma is that we have to stay competitive; that’s the key,” Dinnes said. “So when we bid on a project, we still err on the conservative side because the last thing we want is to price ourselves out.”

In the weeks since then, buyers and traders have determined that prices “overshot lumber’s true market value, and consequently they’ve flattened out,” Logan said.

The outlook of a new agreement is “highly uncertain” at this point, according to Logan. But he predicts additional hikes looming in the near future, as more tariffs will be announced in April and again in May.