HBA Raises Over $65,000 for Harvesters During Spring Parade 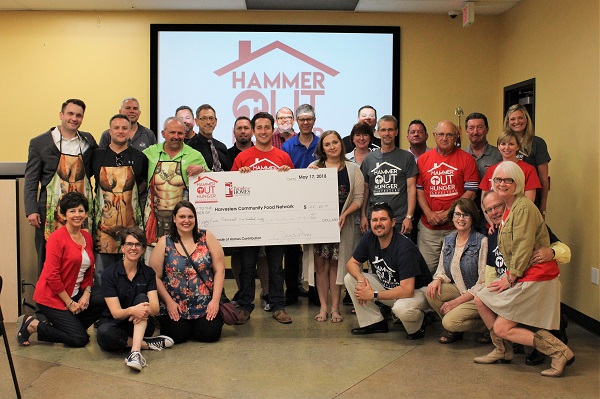 The Home Builders Association of Greater Kansas City (HBA) is proud to announce that during the Spring Parade of Homes the organization raised 195,480 meals ($65,000) to help Harvesters feed hungry children this summer.

Calling it the Hammer out Hunger Challenge, the HBA created three regional teams (Kansas, Missouri North and Missouri South) to take on the challenge of raising, at minimum, 63,000 meals ($21,000). The teams held events, raffles, gave company discounts to customers, hosted Harvesters barrels at their stores and more to gather donations of food and money. A silent auction, sponsored by Capitol Federal, was held during the Parade of Homes Awards Ceremony on May 2 in which all three teams contributed auction items ranging from Kendra Scott jewelry to an African safari trip. The auction raised about $20,000 for Harvesters.

The HBA chose to partner with Harvesters due to the exceptional need it faces during the summer months. During the school year, many children receive meals through school programs. A lot of times these are the only meals they receive in a day. During the summer months, when there are no school food programs, these children go hungry. To help alleviate this problem, Harvesters has a Summer Kid’s Cafe program, which offers breakfast/lunch/dinner five days a week at 76 sites with children’s programming.

“Last year, Harvesters’ Kids Cafe sites served 114,280 meals to children in need,” said Logan Healey, Harvesters food and fund drive engagement manager. “The money raised by the HBA during the Spring Parade of Homes will help feed hungry kids this summer and then some.”

“The Spring Parade is such a popular, Kansas City-wide event that we thought why not take it a step further and use it to help the community at large,” said Jerry Ratway, an HBA member and organizer of the Hammer Out Hunger challenge. “The timing made perfect sense as the Parade is right before school lets out for the summer.”