Three Teams to Hammer Out Hunger During Spring Parade

The Home Builders Association of Greater Kansas City (KCHBA) has established a goal of donating $21,000 (or about 63,000 meals) to Harvesters during the 2018 Spring Parade of Homes. The association has created three regional teams (Kansas, Missouri North and Missouri South) to take on this challenge.

Organized by Jerry Ratway of Weber Flooring, each of the teams is tasked with raising a minimum of $7,000 and the team that raises the most food/money will receive an award and lunch served to them by the other two teams.

The official kick-off of the Hammer Out Hunger challenge was March 1 when all three teams gathered at Harvesters for lunch, to take a tour of the facility and to assist Harvesters with a volunteer activity. The teams are: 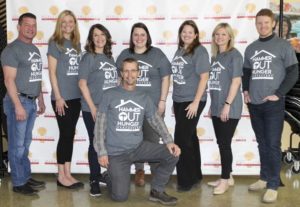 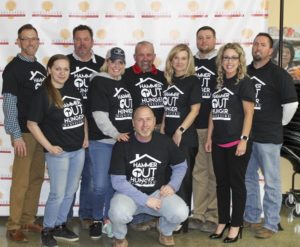 New this year, a silent auction will be held during the Spring Parade of Homes Awards Celebration to assist in raising funds for Harvesters.
KCHBA would like to thank its sponsors of the Hammer Out Hunger challenge:

Look for barrels at some of these members’ locations as well as at the HBA. Or, donate to a team online by clicking here.