Parade of Playhouses Rescheduled for July 17-19 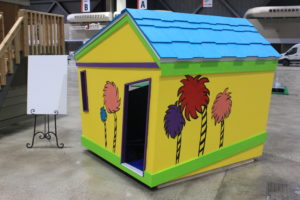 Build Childhood Memories with Your Own Backyard Playhouse!

Sponsored by Bickimer Homes, the Parade of Playhouses, originally scheduled during the Greater Kansas City Home & Lifestyle Show in March, has been rescheduled for the weekend of July 18 at Nebraska Furniture Mart.

HBA members and local schools have built children’s playhouses to be auctioned off to the highest bidder at the show. All proceeds from the auction will benefit Veterans Community Project (VCP). There are 12 playhouses up for bidding. Let your kids play and bid on their favorite for your backyard!

Playhouses were built by:

PLUS Veterans Community Project is turning one of its tiny homes into a playhouse, which will also be auctioned off to the highest bidder. The winning design for this playhouse was submitted by HOK.