Out With the Old, In With the New 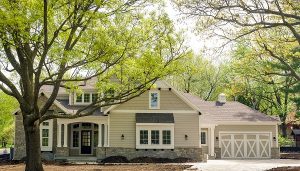 If you want to build a home but don’t want to live on outskirts of Kansas City with a long commute what can you do? The Kansas City area is seeing a growing number of teardown/rebuild, also known as “infills,” homes popping up in established communities closer to the city center.

Many in community development think of infill housing as new houses constructed on a vacant or underused lots interspersed among established urban (or close to the urban core) neighborhoods. A teardown/rebuild is a process in which a real estate company or individual buys an existing home or other building and then demolishes and replaces it with a new home. Frequently, the new home is larger than the previous one.

Reasons for developers to tear down can include increasing the appeal of the property to prospective buyers or taking advantage of rising property values. The process is especially common in established suburbs, where people wish to have larger homes, and yet do not want to move to a distant new development. Replacement often brings modernization, new structures being built to modern building codes, energy efficiency, standards and aesthetics. At times, they are different architectural style, thus not fitting the historic character of the neighborhood.

Based on what John Moffitt of Moffitt Built has seen, the concept of infilling is a nationwide trend. Although it appears to be relatively new to the Kansas City area, Moffitt says it may come down to basic economics. “Home sites in general are becoming scarce and very expensive,” said Moffitt. “So in some neighborhoods, the cost to demolish an existing home and replace it with a new home may be competitive to building a new home elsewhere.”

Besides cost, there are other factors that contribute to this trend. “Emotionally, most established neighborhoods have a better sense and feel of community, as well as bigger established trees than consumers can find in a brand-new subdivision built in a cornfield,” said Moffitt.

“Additionally, walkability, bike ability, drivability, are usually much better in older established neighborhoods,” said Moffitt. “Perhaps the consumer can find a convenient grocery store, coffee shop, drugstore, hardware store, etc. nearby on an infill site, whereas a typical new home subdivision may not have these amenities nearby.”

Not all builders are willing and able to take on an infill project, however, so click here for a list of  2017 Spring Parade of Homes builders who specialize in these types of construction projects.