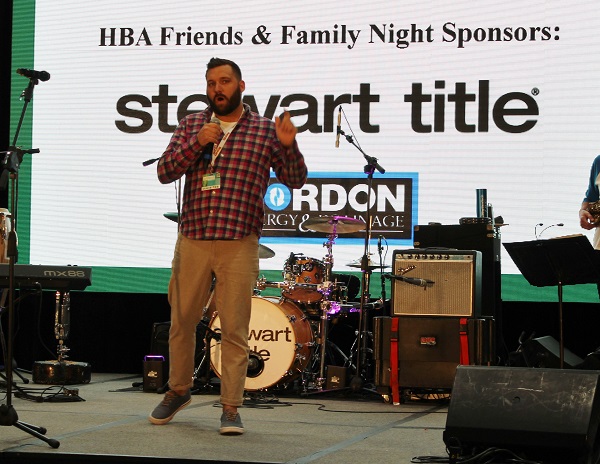 Co-Founder and Chief Project Officer Brandonn Mixon took to the Home Show Main Stage at the 2019 Greater Kansas City Home and Lifestyle Show March 22-24 to share his personal journey to Veterans Community Project. Mixon joined the military in 2009 and through his newfound military family he found stability, security and a sense of purpose for the first time in his life.

However, Mixon’s military career ended abruptly after he suffered a traumatic brain injury and injured his shoulder during a tour of duty in Afghanistan.

“It was the worst thing to ever happen to me,” Mixon told Home Show attendees. “I was told, ‘we don’t need you anymore.’”

After a military discharge in 2013, Mixon returned home and struggled with feelings of isolation and depression. He missed his military brothers and sisters deeply. A short time later, he crossed paths with veterans’ advocate Chris Stout.

After a heart-to-heart talk about the injustices faced by veterans who have selflessly served, Chris invited Brandonn to get involved in a project he was undertaking to help build small community of transitional housing for homeless veterans. The idea was to recreate the same sense of place that veterans experienced while serving.

“When we leave the military, we all struggle with transition. We all get kind of lost,” Mixon explained. “What we wanted to do with the tiny house was to put them back into military mentality as they transition to civilian life.”

VCP has built about two dozen tiny homes so far in Kansas City near 89th and Troost and is on its way to building a total of 49 miniature houses in its Veterans Village. Each 240-square foot home is built in compliance with city codes and includes all-new appliances that the veterans can take with them when they move out, including a stocked refrigerator, TV, stove and microwave.

“We don’t want used stuff. That sets them up for failure. From the moment they walk through the doors, we want to set them up for success,” Mixon said.

Mixon said he has a heart for veterans in transition because he has been there himself. “I tell vets that I have their back. When I was on the battlefield and someone told me that they had my back, that meant something to me. I want to be that place of refuge,” he said.

The Home & Lifestyle Show featured one of VCP’s tiny homes and KCHBA donated $1 of every Home Show ticket sold online to the organization that is dedicated to supporting every man and woman who took the oath for our country. It also hosted a Parade of Playhouses where playhouses were auctioned off to the highest bidder with the proceeds going to VCP. In total, the Home Builders Association, who hosts the annual home and lifestyle show, was able to raise $25,000 for VCP.

VCP invites volunteers from churches, service groups, and individual families to help in their effort to create safe spaces for vets in transition. For more information on how to volunteer, visit www.Veteranscommunityproject.org or find VCP on Facebook.