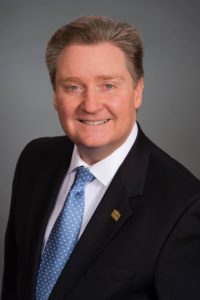 With more than 700 affiliated state and local home builders associations and more than 140,000 members across the country, NAHB represents the interests of the nation’s housing professionals through advocacy, education and research.

2019 NAHB Chairman Greg Ugalde
Taking the helm as NAHB’s Chairman of the Board this year is Greg Ugalde, a Connecticut builder and developer with extensive experience in the home building industry. Ugalde is president and chief legal officer of Torrington-based T&M Building Co., Inc., one of the state’s largest home builders. Since its founding in 1962, T&M has built more than 4,000 new homes in over 45 Connecticut communities for trade-up and first-time buyers. He is also the founder and owner of GFU Investments, LLC, a builder/developer minority-owned business that focuses on urban development and workforce housing.

“A top priority this year will be to address ongoing housing affordability concerns,” said Ugalde. “On average, government regulation accounts for nearly 25 percent of the price of building a single-family home and more than 30 percent of the cost of a typical multifamily development. We will urge federal policymakers to take appropriate actions to ease regulatory burdens in order to help put families in homes, create jobs and move the economy forward. We will also call on Congress to advance comprehensive housing finance reform and to adopt sensible workforce development and immigration policy that will help our industry fill open jobs.”

Dean Mon
Also moving up on the association’s leadership ladder during NAHB’s Las Vegas board meeting was Dean Mon, a New Jersey-based builder and developer with more than 30 years of experience in the home building industry. He was elected as First Vice Chairman of the Board. Mon is president of the D.R. Mon Group, Inc., which specializes in the development and construction of green urban living projects throughout New Jersey. Since 1985, the company has created communities in Morris, Hunterdon, Union, Hudson and Monmouth Counties.

Chuck Fowke
John “Chuck” Fowke, a Tampa, Fla.-based custom home builder with 40 years of experience in the home building industry, was elected as Second Vice Chairman of the Board. Fowke is founder and president of Homes by John C. Fowke, Inc. His company has built hundreds of luxury homes throughout the Tampa Bay area.

Jerry Konter
Jerry Konter joined the NAHB leadership ladder with his election as Third Vice Chairman of the Board. A Savannah, Ga.-based home builder with 40 years of experience in the home building industry, Konter founded Konter Quality Homes in 1977. His company is one of the largest home building firms in Savannah and has established 17 communities and built more than 2,000 homes throughout the local metro area.

Randy Noel
2018 NAHB Chairman Randy Noel, from LaPlace, La., remains on the leadership ladder as Immediate Past Chairman. Noel is president of Reve Inc., a custom home building firm that has developed more than 1,000 custom homes in the greater New Orleans area.

Rounding out the association’s leadership is NAHB Chief Executive Officer Jerry Howard, from Washington, D.C. Howard heads up a professional staff of more than 240 working out of the National Housing Center in Washington. He has served as the association’s CEO/EVP since February of 2001. Previously, Howard was NAHB’s chief tax counsel.