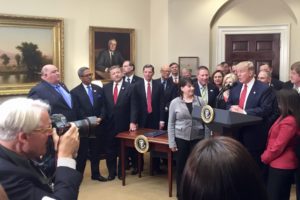 As NAHB Chairman Granger MacDonald looked on, President Donald Trump today honored a campaign promise made to home builders and signed an executive order directing EPA and U.S. Army Corps of Engineers to begin the process of rescinding or revising the controversial “waters of the United States” (WOTUS) rule.

“NAHB commends President Trump for listening to our serious concerns about the flawed WOTUS rule that goes so far as to regulate man-made ditches and isolated ponds on private property,” said MacDonald before the signing ceremony. “This is an important first step toward fixing the flawed regulation and working towards a more sensible WOTUS rulemaking.”

Speaking at the NAHB Board of Directors meeting in Miami last August, Trump vowed to cut burdensome regulations, including the new WOTUS definitions, that drive up the cost of homes for hard-working Americans.

“No one other than the energy industry is regulated more than the home building industry,” Trump said during the Miami meeting. “Twenty-five percent of the cost of a home is due to regulation,” he noted, quoting a 2016 NAHB study.

NAHB has led the effort to address industry concerns with the 2015 rule on the regulatory, legislative and judicial fronts. The rule also has been legally challenged by more than 30 states and environmentalists on both procedural and substantive grounds.

The executive order provides EPA and the Corps direction to rework the rule that dramatically extended the areas in which home builders are required to get permits, blatantly usurping state and local regulatory authority. Two courts have already ruled that there is a likelihood that the rule is illegal and have issued a temporary halt.

“NAHB looks forward to working with the Administration, EPA Administrator Scott Pruitt and the Assistant Secretary of the Army for Civil Works, when approved, to develop a common-sense solution to protecting our nation’s waterways while taking into account the interests of local businesses and communities nationwide,” MacDonald said.