On Tuesday, April 5, HBA members and staff traveled to Jefferson City for Missouri Legislative Day, an annual trip to the Capitol to meet face to face with state legislators.  The day provides an opportunity to maintain relationships with area Senators and Representatives and discuss issues important to the home building industry with the people who have the power to affect change.

HBA members spent the entire afternoon visiting with area legislators.  Notable meetings included House Majority Floor Leader Mike Cierpiot, Senator Dan Hegeman, Senator Jason Holsman, Representative Noel Shull, Representative Nick Marshall, Representative Rebecca Roeber, Representative Jeanie Lauer, Representative Ken Wilson and more.  Legislators were given an update on the level of building activity in their district and the current priorities of the industry.  Topics discussed included local development, workers’ compensation, fire sprinklers, building codes, licensing and local control.  It is critical that members of the housing industry show that they are paying attention to what is happening in Jefferson City and share their views on issues that impact their business.  Thank you to everyone who spent a day away from business to travel to Jefferson City and a special thank you to Misty Hanson, Stewart Title, for providing breakfast.

Members also received a session update from HBAM lobbyist Jewell Patek, who reported that main focus of the legislature at this point is passing the budget.  Other bills are moving very slowly, so it is difficult to find opportunities to push HBA efforts – such as removing the sunset on fire sprinkler laws.  He is also monitoring legislation that could mandate statewide licensing for roofers, but for now the bills are not expected to go forward.  Other prevalent issues in the Capitol this year include ethics reform, a new fuel tax, and voter ID laws.  Expect to hear more controversy about these before the session is over. 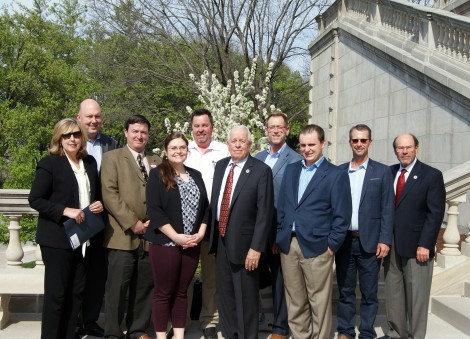