The 2016 ICC Annual Conference and Group B Public Comment Hearings took place in Kansas City from October 16-25 at Bartle Hall.  The conference featured a Building Safety & Design Expo, education sessions, and drone classes and demos.  The purpose of the public comment hearings was to shape the 2018 International Code Council’s model building codes.  More than 2,000 proposals from builders, manufacturers, energy efficiency advocates, fire officials and trade partners were heard throughout the week.  Those that survived the process are now one step closer to becoming new building codes.

The hearing process allowed for testimony from both supporters and opponents of the proposals, and included time for rebuttals on controversial topics.  Testimony was provided by a range of interested groups, including representatives from the energy sector, city code officials, engineers, associations, and individuals.  NAHB provided testimony on a number of the codes dealing with energy and structural provisions.  Once all the positions were heard and evaluated, the proposals were voted on by ICC members, usually with a show of hands or by a standing count if the vote is close to a tie.

The HBA welcomed a few special guests in town for the hearings at the October Board of Directors meeting, seen below.  We heard from Phil Hoffman – Chairman of Construction, Codes and Standards, NAHB; Chip Dence – Vice Chairman of Construction, Codes and Standards, NAHB; and Randy Noel – 2nd Vice Chairman of the Board, NAHB.  They urged members to attend the code hearings to “learn how the sausage is made.”  Members of the KCBHA are grateful to George Schluter, who works tirelessly to monitor the code process. 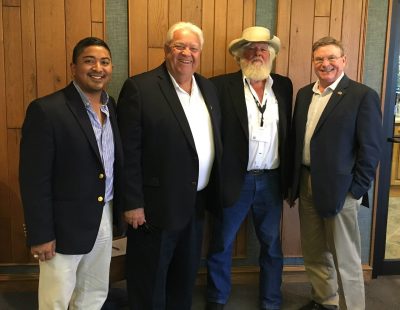