Homeownership is Key to Household Wealth

According to the 2016 Survey of Consumer Finances (SCF), nationally, the primary residence represents the largest asset category on the balance sheets of households in 2016 (as shown in Figure 1 below). At $24.2 trillion, the primary residence accounted for about one quarter of all assets held by households in 2016, surpassing other financial assets1 (20%), business interests (20%) and retirement accounts (15%). 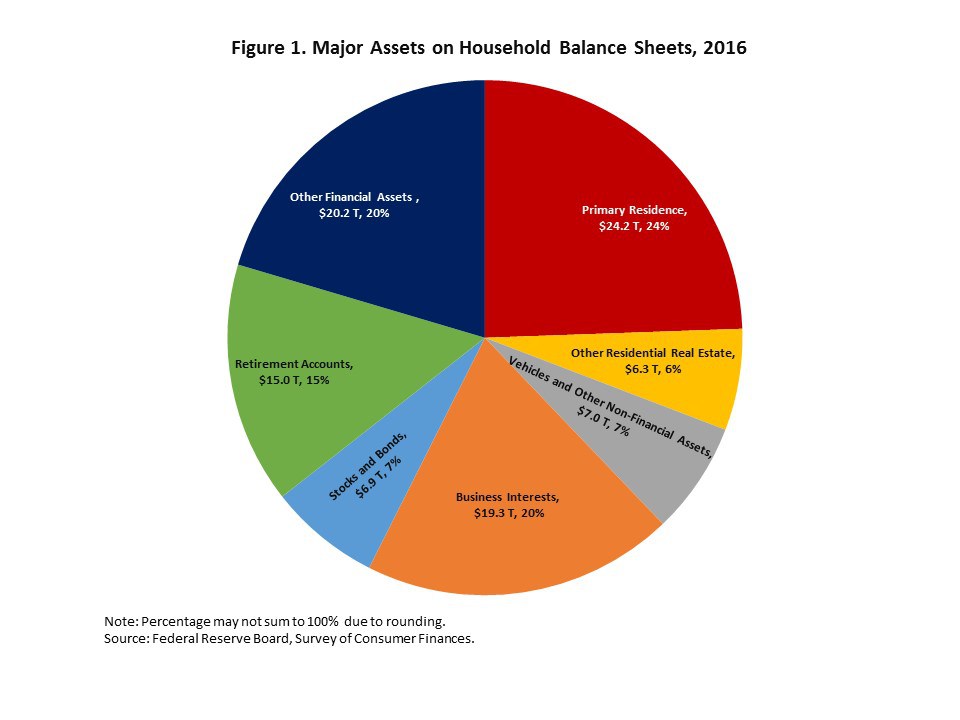 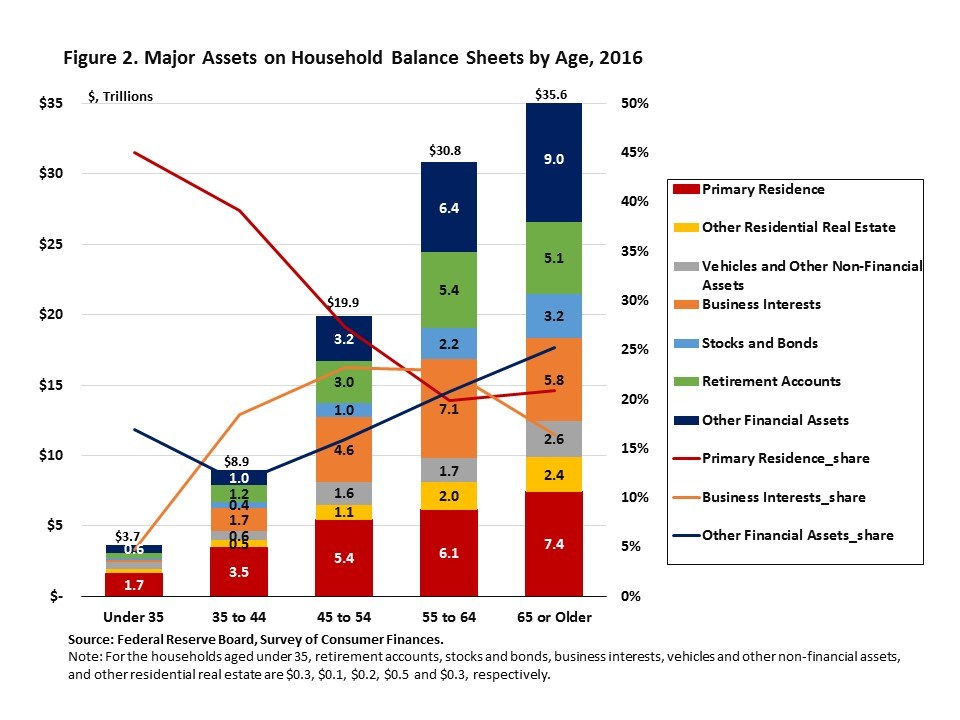 In Figure 2, the bars represent the distribution of major assets on household balance sheets by age categories in 2016 and the lines show the changes in the shares of the primary residence, business interests and other financial assets.

As shown in Figure 2, total assets were $3.7 trillion for households under age 35, while they were $35.6 trillion for households aged 65 or older. The aggregate value of assets held by families where the head was aged 65 or older was approximately 10 times larger than those held by families where the head was under the age of 35. The increases in the total assets among age groups indicate that the value of assets grows with age groups.

Although the aggregate value of the primary residence increased with age, partly reflecting higher homeownership rates across age categories, the aggregate value of the primary residence as a share of total assets declined with age. The decline in the share of total assets represented by the aggregate value of the primary residence was offset by growth in the share of other asset categories in aggregate, most notably business interests, other financial assets, and retirement accounts.
An analysis of the SCF suggests that the offsetting changes in the shares of these asset categories are not mutually exclusive. As shown in Table 1 below, the households who owned primary residences also owned the majority of the other assets in aggregate as well, such as other residential real estate3, vehicles, other non-financial assets4, business interests, retirement accounts, stocks and bonds and other financial assets. The results shown in Table 1 combined with the figure above suggest that owner-occupied households expand into and build-up the value of other asset categories as well. 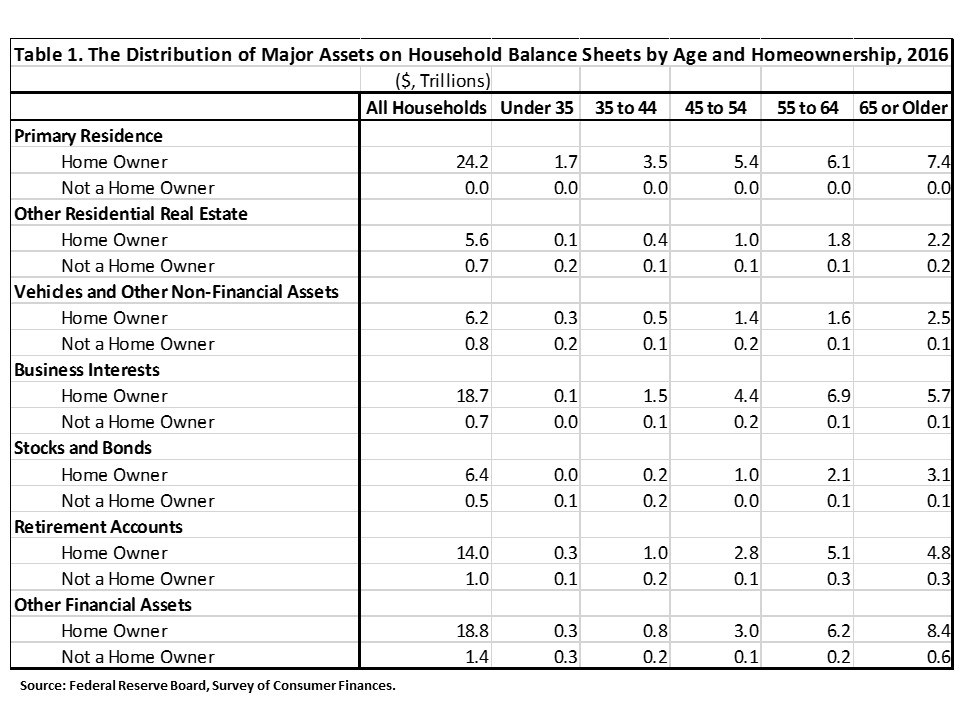 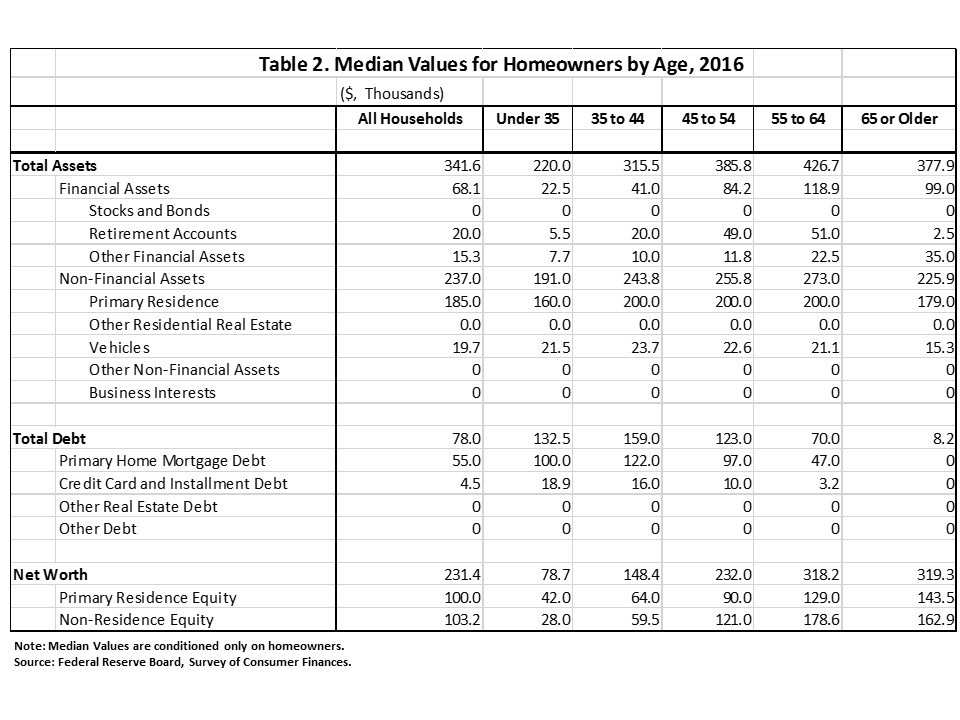 However, as illustrated by Table 3 below, the median value of business interests, other non-financial assets, and stocks and bonds grew over the 35 to 64 age categories among households that owned these assets. Table 2 indicates that a minority of homeowners own such assets, but Table 1 suggests that the owners of these assets are likely to be homeowners. As a result, the median value of both non-financial and financial assets on homeowners’ balance sheets, as shown in Table 2 above, rose with age.

Across homeowners, the median amount of primary residence equity, home equity, rose successively with age, largely reflecting a lower amount of mortgage debt as opposed to a higher home value. A previous post illustrated how households 55 and above account for 67 percent of housing equity because they “have had more time to accumulate wealth”. 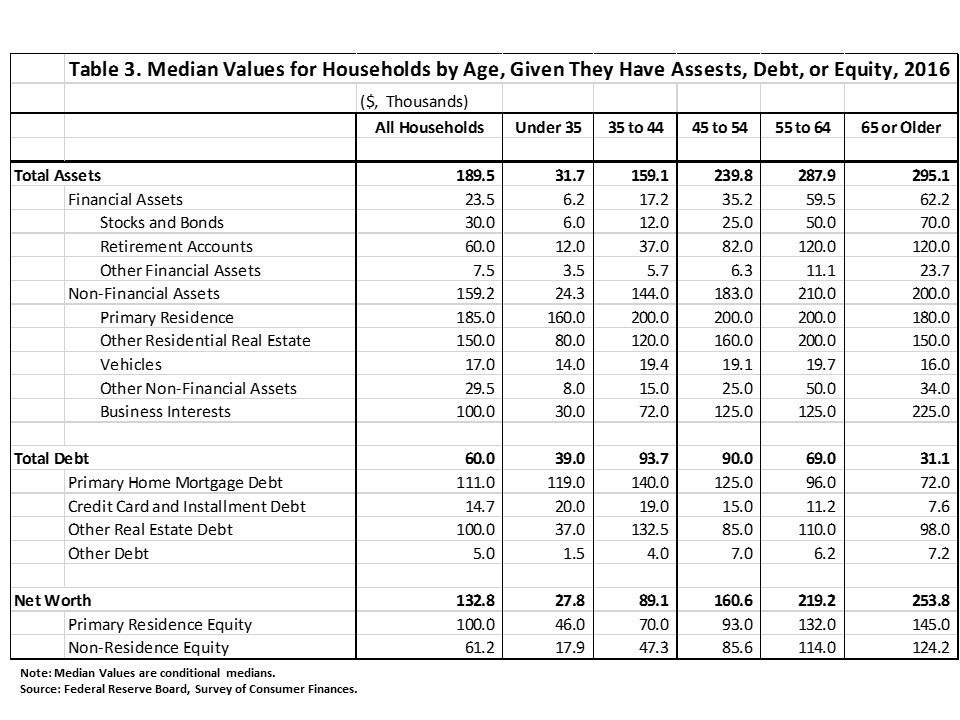 Note:
1  Other financial assets include loans from the household to someone else, future proceeds, royalties, futures, non-public stock, deferred compensation, oil/gas/mineral investments, and cash, not elsewhere classified.
2  According to the SCF, the term “families”, used in the SCF, is more comparable with the U.S. Census Bureau definition of “households” than with its use of “families”. More information can be found here: https://www.federalreserve.gov/publications/files/scf17.pdf.
3  Other residential real estate includes land contracts/notes household has made, properties other than the principal residence that are coded as 1-4 family residences, time shares, and vacation homes.
4  Other non-financial assets defined as total value of miscellaneous assets minus other financial assets.

This article was originally published on NAHB’s eyeonhousing.org by Jing Fu.