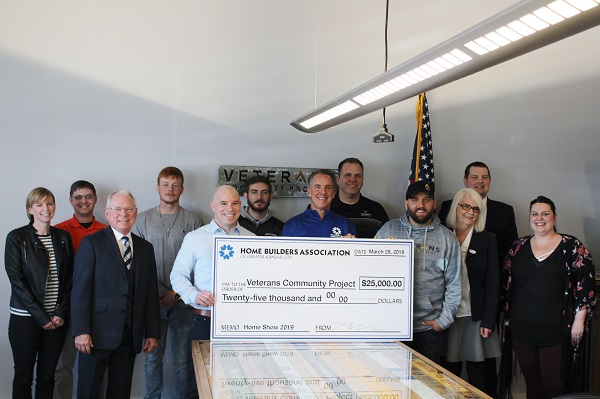 The Home Builders Association of Greater Kansas City (HBA), is pleased to announce that it raised $25,000 for Veterans Community Project (VCP) during its 2019 Greater Kansas City Home & Lifestyle Show, March 22-24. VCP is a local nonprofit focused on eliminating veteran homelessness by providing transitional housing in the form of tiny homes and by enabling access to 360-degree services.

VCP showcased one of its tiny homes at the show so attendees could gain a better understanding of what VCP’s tiny homes include.

“We’re pulling these guys out of the trenches in their battle and saving their lives because they would have done the exact same for us,” said Brandonn Mixon, one of Veterans Community Project’s co-founders and a retired Army specialist. “With the HBA’s support, we’re going to continue to provide housing stability and address the underlying cause of the Veteran’s homelessness.”

To raise funds, HBA members Bickimer Homes, Ernst Brothers Construction, Gary Kerns Homebuilders and Bonner Springs High School built playhouses to be displayed during the Greater Kansas City Home and Lifestyle Show. Called the Parade of Playhouses and sponsored by Masonite, attendees to the show had the opportunity to bid on the playhouses via an online auction with the proceeds benefitting VCP. Additionally, $1 from every home show ticket sold in advance online went to its efforts to end veteran homelessness.

“As an organization focused on building communities, the HBA has supported the Kansas City area for more than 80 years,” said Will Ruder, HBA executive vice president. “Our nation’s veterans deserve more than just our gratitude. Supporting the important mission of VCP allows the members of the HBA to serve those who have served us and we are honored to do so.”

The HBA presented a check to VCP on Tuesday, April 2 at 10:00 a.m. HBA members, Bonner Springs High School students and other donors were in attendance.