As part of Bringing Housing Home™, members of the Home Builders Association of Greater Kansas City met on Friday, March 11 with Congressman Emmanuel Cleaver II (D-MO) to talk about issues important to the homebuilding industry.

One of the main topics of discussion was FEMA’s recent floodplain rule that, due to new and somewhat arbitrary mapping, would have vastly expanded the areas of land that require flood insurance.  As Ranking Member of the Subcommittee on Housing and Insurance, Rep. Cleaver worked with NAHB to support more realistic and less harmful measures with the help of fellow legislator Rep. Maxine Waters (D-CA).

Members also congratulated the Congressman on his recent success in creating the first bill since 2010 to pass the House without a negative vote.  Known as the “The Housing Opportunity Through Modernization Act of 2015,” the legislation was a bipartisan effort by Rep. Cleaver and Rep. Luetkemeyer (R-MO) to improve and create additional efficiency in housing programs for low-income families and reduce homelessness for veterans.

George Schluter, Past President of KCHBA and life director of NAHB, also informed the Congressman about the upcoming ICC hearings in October and talked about the various code changes that have been proposed by the Department of Energy, many of which could be deemed unnecessary.  According to Schluter, “most builders already perform above and beyond the current code requirements in order to build the highest quality house for their clients.”  Rep. Cleaver expressed interest in the hearing process and indicated that he might drop by to observe come October.

“This was a great opportunity to maintain the strong relationship between local home builders and Congressman Cleaver, one of our most valued voices on housing in Washington,” said EO Sara Corless. 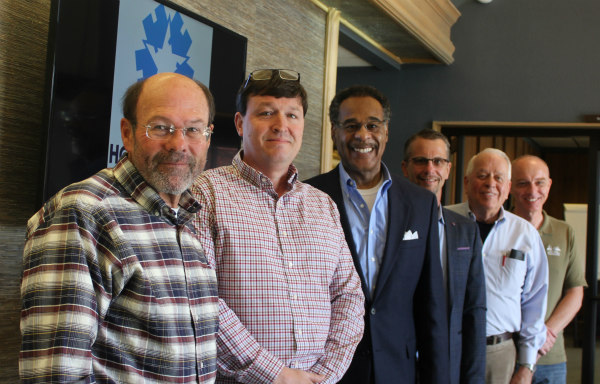